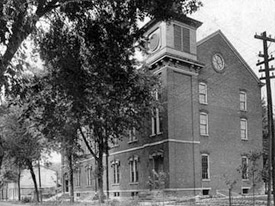 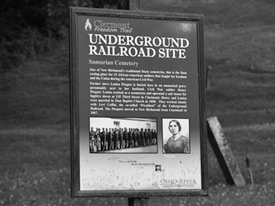 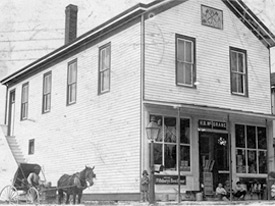 According to Everts' 1880 History of Clermont County, Ohio Township "is one of the original townships, and lies on the Ohio west of the centre of the county. On the east is the township of Monroe, and west and north is Pierce, until thirty years ago (1850) a part of its territory. Bordering the narrow strips of bottom-lands along the Ohio are high hills, some of them having an altitude of three hundred feet, but whose sides are gently sloping. Their tops are generally level, forming beautiful uplands, which extend to the broken ground along the streams flowing through the interior of the township. The northern part is pleasantly undulated, and in all the township there is but little waste land. The principal stream is Twelve Mile Creek, flowing from Monroe south of the centre, in a slightly southwestern course, to its mouth, below New Richmond."

"Isaac Ferguson and his family were the first to make a permanent settlement in Ohio township" ... "In the spring of 1796 he moved his family to his new home, eighteen miles above Cincinnati and two miles below New Richmond." ..." Isaac Ferguson lived on the W.T. Gray farm, where he established a ferry soon after his settlement, which was maintained for many years."

Today, Ohio Township is the smallest of the 14 townships in Clermont County with a total area of 13.8 sq. mi. The 2010 census reported 5,192 living in the township, 2610 of whom were in the unincorporated portions of the township. There are two school districts that serve the area, New Richmond Exempted Schools and West Clermont Schools.

Located within the township are, the Village of New Richmond and the unincorporated settings of Lindale and Mt Pisgah. The township itself offers a rural setting, yet close to shopping, churches and easy access to major highways. 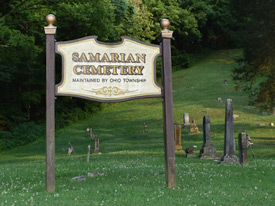